Four Full Moons Ahead and What They Mean for You

Throughout the year, the moon goes through phases as it circles the earth. Each full moon is known by different names around the world based on individual beliefs and religions. In America, the full moons have been gifted with different names for the month in which they occur by Native Americans who first observed the moon’s cycles millennia ago.

The following names for each month’s full moon are among the most recognizable, and they come from the Algonquin tribe of the North East. When the moon is full, you can draw from its energy and enact positive changes in your life. We’ll begin with this month’s full moon.

This full moon once indicated a time when hunters could more easily seek out their prey. With autumn being in full effect and animals such as deer and foxes preparing for winter, hunters would have higher success in securing food for themselves.

When this full moon appears, it is a good sign to hone in on your goals and identify your best course of action in achieving it. The Hunter’s Moon presents opportunity and change, reflected by the shifting of the seasons.

At this time of year, beavers begin preparing for winter, so setting traps and securing ample fur for the colder months early on in November was an advisable practice.

Before December arrives, this full moon serves as a reminder to take stock of your health and resources. If you have unfinished business or find that you lack something important, now is the time to sort that out.

Known for long nights and bitter chills, the December full moon served as a reminder that winter was only just beginning, as it often occurs before the winter holidays.

While the Cold Moon can seem harsh, you should use it as a symbol of hope and perseverance. Long, cold nights or other challenges accompany this season, but the days will gradually become longer. This full moon can help you develop a positive, hardy attitude even when your situation appears grim.

As the days become longer and brighter, wolves tend to renew their anxious hunts for food. They are hungry and desperate, and this drive leads them to pursue their prey with vigor and determination.

This full moon can help aid in motivation and ambition. Winter can be mistaken as a time for sloth and survival, but the start of a new year is the best time to begin something new.

Influenced by the ancient pagan traditions of Samhain, the holiday now known as Halloween is associated with costumes, candy, and all things spooky and scary. Occurring on October 31 each year in different nations, Halloween has some history with the occult, and celebrations vary based on location.

This pagan festival was celebrated by the Celts to honor the end of summer and usher in the darkest part of the year. It was believed that, at Samhain, the veil between the world of the living and the world of the dead was at its thinnest, allowing for communication with the deceased. The rituals and festivities that took place reflected this belief. Participants would make offerings to please their ancestors who might return, and they also would disguise themselves to avoid being kidnapped by more malicious creatures, most often the Sidhe or other fae, who could more easily cross into the world of the living at that time of year.

When the Romans conquered Celtic territory, they began to integrate their own traditions into Celtic practices. The Roman festival Feralia was designed to honor the dead, much like Samhain, and the Romans also celebrated their goddess Pomona who was associated with fruit and trees around the same time. It is from this celebration that the tradition of bobbing for apples might originate. Celebrating the dead in some form or another at this time of year has been relatively consistent, even across cultures, as the shift from summer to autumn is commonly associated with change and the approach of darker months.

All Saints’ Day and All Souls’ Day

Catholic leaders attempted to adapt the festival into something more conducive with their beliefs. In the fifth century, the celebration was shifted to springtime and was slated to celebrate saints and martyrs. However, in the ninth century, Pope Gregory returned the celebration to its original season, establishing All Saints’ Day on November 1 to honor deceased saints and All Souls’ Day on November 2 to honor all deceased believers of the Christian faith. Eventually, the day before these festivities, October 31, became known as All Hallow’s Eve. Though the practices and beliefs shifted under ruling parties, the practice of honoring the dead in autumn ultimately remained.

As a melting pot of many European cultures, the practices associated with Halloween in America are an amalgamation of cultural practices. The tradition of Trick-or-Treating, for example, is believed to be a blend of Irish, Scottish, and English customs. In some early practices, some groups would dress in costumes and visit houses to sing to the dead; they earned cake as payment. The nature of playing tricks or pranks also originated from ancient practices, though these tricks were commonly played by fae creatures. In America, Halloween was a community-oriented holiday, but in an effort to limit harmful pranks and vandalism, marketing efforts shifted to children alone.

Celebrations of the Autumnal Equinox Around the World 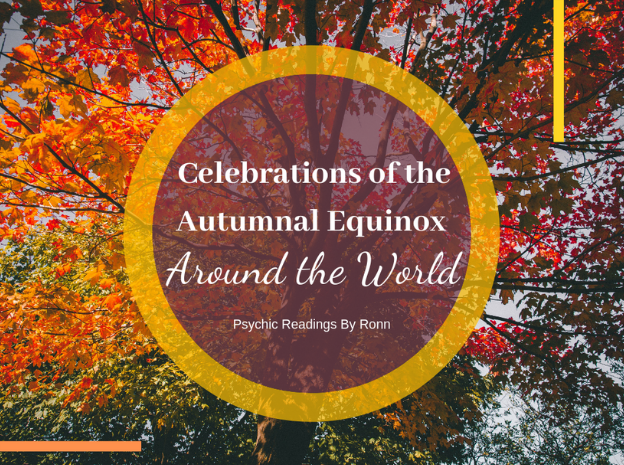 Twice a year, it is believed that the length of the night will equal the length of the day. These days are referred to as equinoxes and they occur to signify the beginning of spring and the beginning of autumn. For centuries, civilizations have celebrated the arrival of the autumnal equinox as it commonly coincides with the middle of the harvest season. Naturally, there are spiritual beliefs and practices that traditionally accompany these celebrations, as well.

In China, the full moon which falls closest to the equinox leads to the start of the Harvest Moon Festival, also referred to as the Mid-Autumn Festival. The moon is a highlight of this festival, and round pastries known as mooncakes are shared and eaten as participants watch the moon and celebrate the success of the rice harvest.

Those in Great Britain celebrated the harvest with the arrival of the equinox, though they typically held their festivals on a Sunday regardless of what day on which the equinox actually fell. When Europeans crossed the Atlantic to colonize America, they brought this celebration with them, forming the basis of the Thanksgiving celebration.

In Japan, this Buddhist holiday occurs on both equinoxes. It serves to recognize the transient nature of life and honor the deceased. It is commonly believed in Japan that the land of the afterlife is due west, and on the equinoxes, the sun sets exactly west, drawing a connection between the cosmic event and spiritual beliefs. Participants of this holiday may venture to the graves of loved ones to tidy up the stones. On these holidays, the equinox reminds participants of how life may be quick to cease, but that death is not the end.

The Pagan holiday of Mabon falls on the autumnal equinox. This celebration welcomes in a time of harvest and prosperity. Autumn may be viewed as a time of decay as many trees lose their leaves and creatures begin preparing for the harsh winter, but in these belief systems, the equinox represents change and new beginnings. Every celebration is different, but many Mabon holidays are centered around gratitude, health, balance, and community.

Across the world and throughout history, the equinoxes have held great significance in the lives of many cultures. Though celebrations tend to differ based on geographic, religions, and other values, the autumnal equinox remains influential in our lives.

Most Powerful Gemstones and Crystals for a Virgo 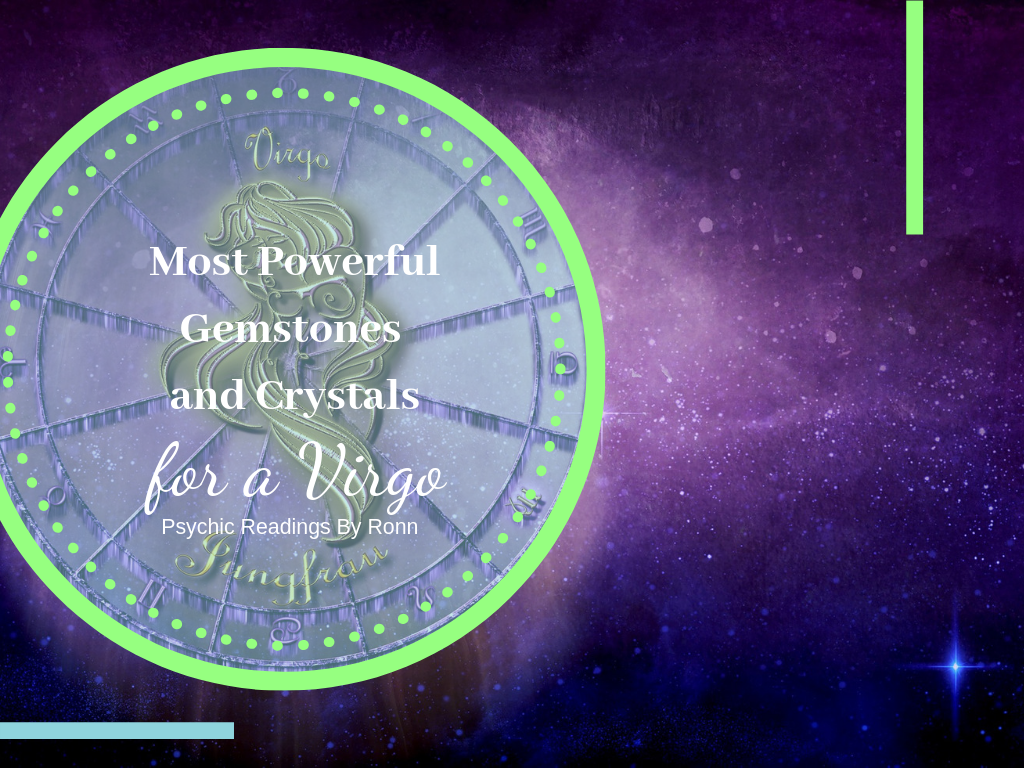 Born at the tail-end of summer, those with a Virgo Sun sign are often more down-to-earth than the other summer signs. This is a fitting description as those born between August 22 and September 22 are, in fact, Earth signs.

Virgos are often analytical and critical of the world around them, and they aspire to make their ideal visions of their lives come true. However, Virgos often face deep internal conflict, as they are prone to dissatisfaction when they recognize that their dreams cannot match reality.

It can be difficult for Virgos to desire order when surrounded by chaos, and this challenge can cause great stress for them. The gemstones described below can help Virgos manage this discord, ground themselves, and achieve their goals.

As Virgo’s birthstone, green jade is undoubtedly the best option for those with this Sun sign. Promoting harmony, attracting positivity, and summoning healing energy are just a few of the powerful properties this stone can exhibit.

With an earthy appearance and name, Moss Agate is ideal for Virgos. This stone is geared toward both new beginnings and radical change, two ideals which are close to the heart of most Virgos. Using this stone to channel positive thoughts about the future can help Virgos conceptualize how they can make those changes happen.

Because Virgos tend to become withdrawn and internalize their concerns, Fluorite is useful in dispelling negative energy. This stone can also help Virgos better understand their own emotions and, in turn, aid in spiritual growth.

Virgos may be something level-headed, but that doesn’t mean they can’t become heated when dealing with their passions. Though this drive is part of what makes Virgos so powerful and influential, heightened emotions can be draining. Green Aventurine is a soothing stone that can help Virgos calm down when their emotions run too high. It can also help Virgos take time away from their thoughts and simply relax.

When consumed by thoughts of idealism and perfection, Virgos can become preoccupied by these ideas and fail to account for other essential aspects of their lives. Amazonite can help Virgos achieve balance and better manage their thoughts, emotions, and everyday lives.

Most Powerful Gemstones and Crystals for a Cancer 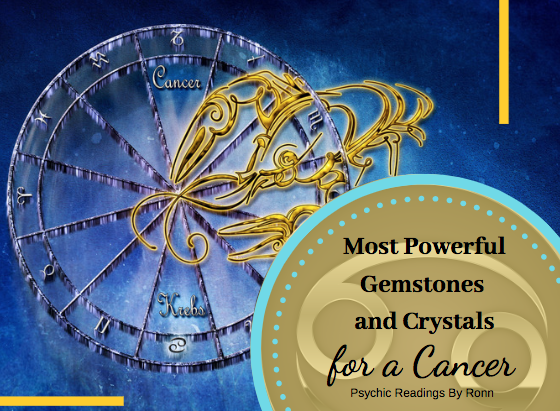 Those with a Sun sign in Cancer are born between June 21 and July 22. Cancer is a Water sign that is ruled by the Moon.

Cancers are dynamic and contradictory. Don’t let their rampant energy fool you; they are also full of love and kindness. Cancer signs are trustworthy friends, passionate lovers, and realistic individuals. They are also prone to fluctuation and feelings of instability.

Balancing your Cancerian energy is no easy task. Below are a few gemstones that can help Cancers manage their emotions and attain peace.

Connected to the Moon, Cancers should naturally be drawn to the moonstone. This beautiful stone can help encourage self-reflection and intuition. For the emotional Cancer, this stone can supply a needed outlet for introspection.

As kindhearted individuals, Cancers are often found to wear their hearts on their sleeves. This stone is soothing and encourages self-love in addition to the love that tends to radiate out from Cancers. Rose quartz can be used as an amplifier for Cancers’ love.

As a water sign, Cancer moves like the tide through thoughts and patterns. Abalone shell can help connect Cancers not only to their own emotions but to the emotions of others. This shell promotes open, clear communication between parties, as well as the sharing of emotions and thoughts.

Cancers have a reputation for being sensitive, and while this trait is not a negative one, some individuals find that their emotional reactions actually hold them back. Chrysocolla can help combat this problematic hypersensitivity by desensitizing the Cancer to emotional situations and helping to diffuse existing ones. This stone also promotes healing from the past and moving toward a more positive future.

Another connection to the sea agatized coral anchors Cancers and provides additional stability. This stone fosters strength and healing.