How to Predict Future Timing With Tarot : Michigan Psychic Blog

How to Predict Future Timing With Tarot 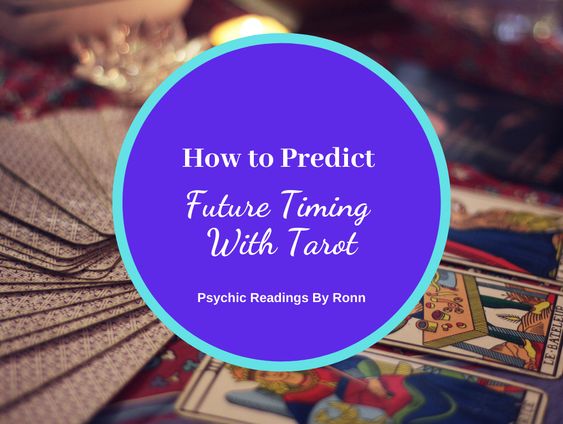 When it comes to predicting the timing of the future, tarot cards are usually the most used method. And the most common question that a querent, i.e. the person who seeks or consults the tarot reader, is "when?". Whether it is when the querent will find his/her soulmate or when he/she will get a promotion at work, most people want to pinpoint when a personal event will happen to them in the future. This question, however, is considered to be one of the most challenging and daunting questions for a tarot reader.

That being said, there are several tarot techniques that a tarot reader utilizes to time an event. A few of these techniques are presented in the following article.

Determining time in tarot by using the main or the divinatory meaning of tarot cards is considered to be one of the easier methods used by tarot readers. In this method, the focus is not only on when the event will occur, but also on what may need to happen before the event occurs. Reversed tarot cards can also be utilized to predict the timing of a particular event. These cards usually denote that the event is unlikely to occur unless the querent is willing to make major changes.

Another predictive method is using suits and elements of the tarot cards. This method will help identify a more specific timing of an event. Wands denote days or spring, Swords denote weeks or autumn, Cups denote months or summer and last but not least, Pentacles denote years or winter.

Predicting the timing of an event in tarot based on the zodiac is an easy method. This is clearly illustrated here.

There are certainly numerous methods to determine the timing of an event by using tarot cards. Each tarot reader uses the method he/she feels the most comfortable with and the one that gives them the most accurate reading.