How to Make the Most of a Blue Moon : Michigan Psychic Blog

How to Make the Most of a Blue Moon 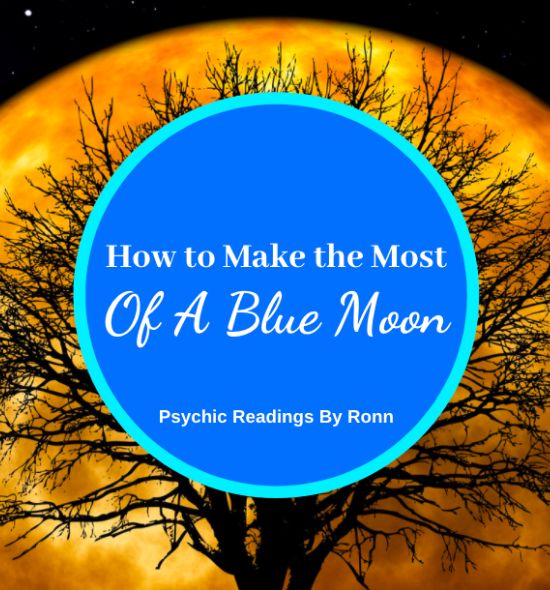 This year, October is host to two full moons. When this phenomenon happens, the second full moon is referred to as a blue moon. In astrology, full moons are powerful times, and a blue moon is especially noteworthy. Making an effort to utilize the energy of the blue moon can entail various activities and practices while the moon is visible.

This year, October’s blue moon falls on Halloween, or Samhain, and it will be the first blue moon visible in every time zone since 1944, making it extra special. Such visibility will not happen again until 2077, according to the Farmer’s Almanac. Here are a few ways you can make the most of this blue moon.

This year has presented unprecedented difficulties for many of us, and as plenty of people have pointed out, much of the chaos stateside began around a full moon in mid-March. While this blue moon won’t undo the events of this year, it presents an excellent opportunity to release unnecessary tension, resolve unaddressed stress, and heal from the negativity.

Based on the position of Uranus in relation to the moon at this time, change will be imminent, even if we don’t want to face it. While change can seem chaotic or disruptive, it’s important to recognize how beneficial change can be, especially during a year full of turmoil. Embracing a lack of control and submitting to the will of the universe is easier said than done, but doing so could allow you to benefit as the year draws closer to its end.

As with all full moons, the blue moon presents a great opportunity to finish projects and reflect on the events of the preceding moon cycle. It is often advised that you avoid starting new things during a full moon; the blue moon in particular tends to radiate energy that is better attuned to letting go than taking hold.

There is no one right way to celebrate a Halloween blue moon. Trusting in the nature of the full moon, especially during these times, and committing to the processes of healing and change can help us approach the end of the year with positivity, productivity, and hope.